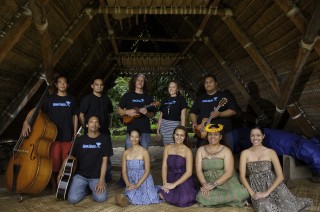 In March 2010, representatives of the Mana Maoli Collective from 6 islands formed an all-star group of well known and underground musicians, kumu hula, and hula dancers. They were the 1st to represent Hawaiians at the Pasifika festival, a gathering of a quarter million people from dozens of nations across the Pacific, already in its 18th year. They also provided nearly 2 dozen additional shows and workshops across many cities, schools and communities in Aotearoa.

In March 2011, another all-star group (with a mix of returnees and new representatives) returned to represent the Mana Maoli Collective and Hawaii at Pasifika, adding to their itinerary Nga Puhi, the largest tribal run festival; WOMAD, the largest paid (sellout) festival of highest international scope and calibre; and more workshops in the schools and community.

Both trips allowed for substantial exchange of culture, knowledge and inspiration with our Pacific Island cousins, especially our Maori hosts. There were collaborations on and offstage with many well respected artists/bands in Aotearoa (i.e. Katchafire, 1814, Tigilau Ness, Maisey Rika, 3Houses Down), as well as kupuna, educators, dancers, and community/cultural leaders. Substantial media exposure at the iwi (tribal) and national level helped increase awareness and appreciation for Hawaiiʻs music, dance and culture, as well as Mana Maoliʻs vision and mission.

Our future plans include an Aotearoa meets Hawaii mashup CD project – featuring at least one Hawaii and one Aotearoa artist on each track. Here you will find 1st time collaborations across well respected artists that you wonʻt wanna miss! Examples – John Cruz with Tigilau Ness, Fat Freddyʻs Drop with Kimie and Ooklah the Moc, Anuhea with Maisey Rika.